Through a series of ghostly reminisces a young man tries to piece together fragmented moments from his past. These memories are triggered by his admiration for his best friend Johnno. However, as the story unfolds, this hero worship is turned to revulsion as we pay witness to the web of deception and violence that Johnno creates, dragging both the narrator and audience in its destructive wake.

Dad’s Dead will be a film that both repels and fascinates.

Essentially, this is a timeless story exploring the power relationship between the two boys.

Although Johnno is bullying and brutish the narrator is blindly compelled to follow. The audience shares the Narrator’s captivation and discomfort through the use of subjective camera.

Research has shown that our trust in people can be influenced by the degree of symmetry about their faces. Deformed photographic images of Johnno are used to give us an insight into his true psyche.

Powerful visual imagery combined with Narration by Ian Hart, whose gritty and powerful delivery binds the film together.

The film is aimed at an adult audience, provoking reflection on the current media obsession with teenage violence. Recent events, such as the murders of Damilola Taylor and Jamie Bulger have stirred emotions of collective guilt in the general public. People become fascinated voyeurs, powerless to intervene.

TECHNIQUE & ART DIRECTION
Manipulated live action mutates and combines with ghostly animation, the more distorted and neurotic the Narrator’s memories become. This creates a juxtaposition of normality and abstraction, by pulling the live footage away from reality.

Past photographic imagery will be mixed with the present; visions of inner city estate dereliction will flash against animated reconstructions of the same location in its heyday.

This will be achieved via photography and digital treatment. All the footage will be shot on Betacam SP / DV then treated using After Effects & Aura on the PC.

NARRATION
Ian Hart will deliver the script in authentic style, with a Liverpool accent. Hart’s screen appearances include Backbeat and Ken Loach’s Land and Freedom.

MUSIC & SOUND
Specific attention will be paid to making the music fit into the period, to strengthen the power of the flashbacks. Barry Adamson will compose the music. The sound will be manipulated to meld with the visuals by Tim Barker to create a claustrophobic soundscape.

LOCATIONS
The locations will be real – abandoned council flats, derelict schools, and ‘sink’ estates in the centre of Liverpool. 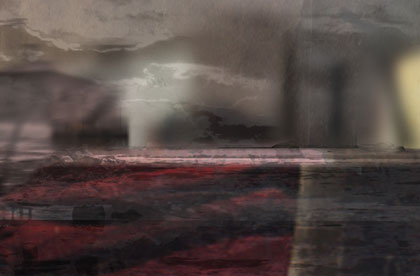 Early experiment with image layering and treatments, included in submission to animate!

post-production voice script
animate_dadsdead_voice_script01.rtf
All character voices and some screenplay extracts, without timecode, in RTF format

A collection of press reviews dated August 2003, plus Televisual magazine ‘Storyboard’ feature in January 2003, all in one PDF file
animate_dadsdead_press_reviews01.pdf