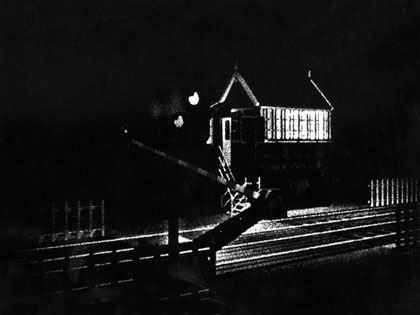 Level crossing: The train that goes past at the level crossing was filmed by me and my brother John in the West Country (my films are always real family affairs). I was disappointed by how short the train was and it didn’t allow me time to mix in all of my London photographs over the scene. So I just looped the passing carriages. I was really chuffed to receive a letter from a train-spotter who saw the film on Channel 4 and said he loved it but was puzzled which railway line had a train with so many carriages!

a film by Robert Bradbrook

The teenage world via Apple Mac. From childhood loft dreams to the horse latitudes, village life through the eyes of a boy on a bicycle. Conservatism and decay. A black and white film in remembered colour.

End of Restriction film, stills and other materials © Robert Bradbrook 1994

End of Restriction a film by Robert Bradbrook