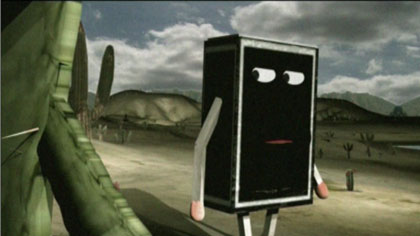 a film by Tim Hope

A collection of bizarrely original animated stories from scripts written by young children. Emulating the approach of New York’s 52nd Street Project and London’s Scene & Heard theatre groups, the film is voiced by professional adult actors and directed to render the children’s dramatic intentions as sincerely as possible.

Three short films within one film:

Revenge Is Cold – Woody the box of matches dreams of becoming a lighter. In the Mexican desert he encounters Antus, an untrustworthy cactus, who claims he can help him fufil his ambitions. Together they journey to ‘The Land of the Freeze’ – the North Pole – where a surprise is in store for both of them.

Love Then First Fight – Bob Brakinlot the crowbar is a reformed criminal, determined to give himself a second chance. Into his world bursts Blossom Shritz, a shirt whose life has been torn apart. Desperate for acceptance and affection, they seem to offer each other “a chance to be average in a nasty world“. But can they both put the past behind them?

Keep Going – A young egg, Stuart, escapes from his fridge in Scotland on a mission to meet his hero, Michael Jackson. On the streets of Aberfeldy he bumps into Andrew, a lonely gorilla, who is searching for his family. Together they begin an epic quest, which will lead them to both joyful and tragic ends (via Inverness).